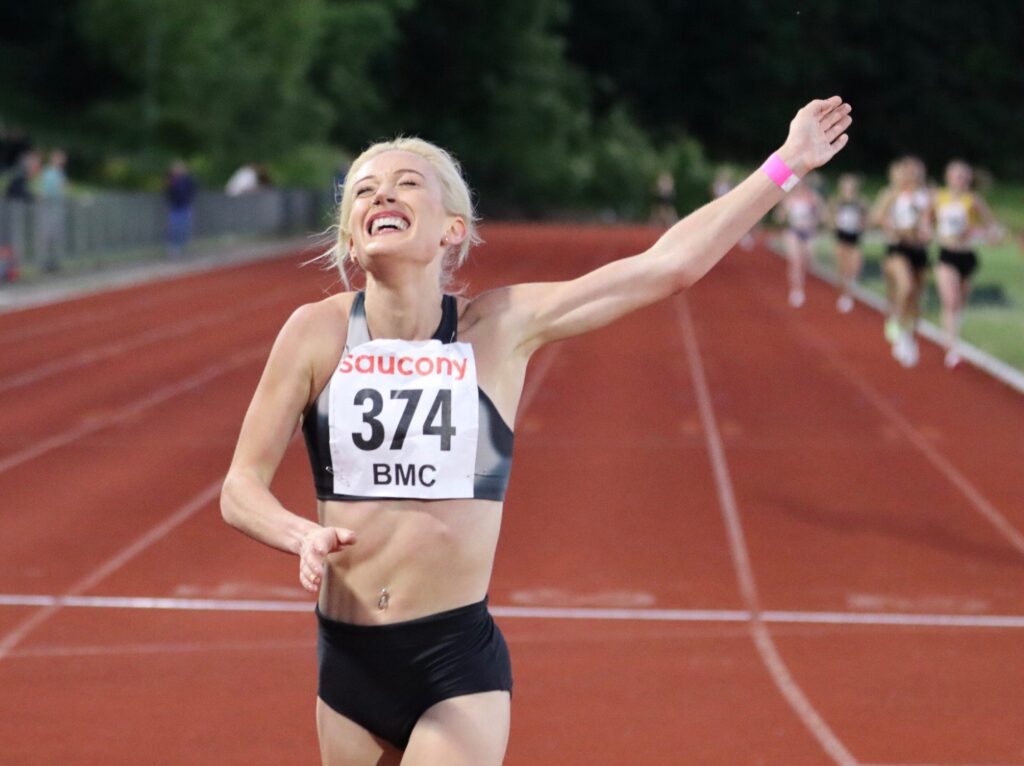 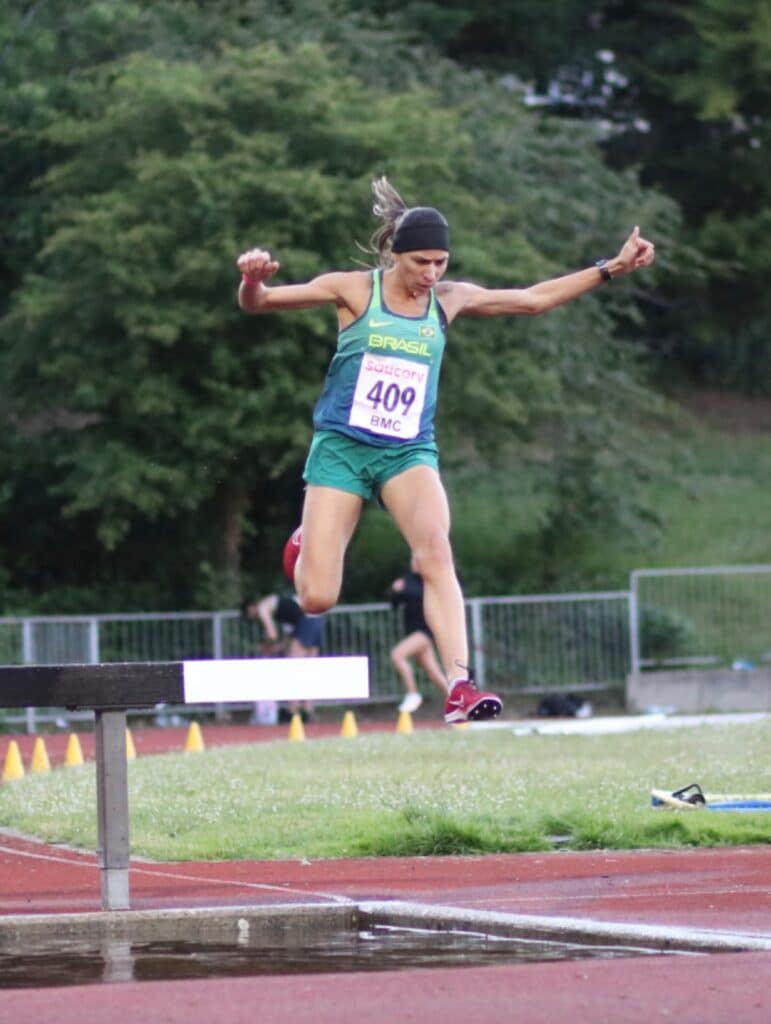 SO if you are going to celebrate your birthday in style then for Tatiane Da Silva setting a continental, national and BMC record must have felt like having your cake and eating it with extra icing and a cherry on for good measure.

The Brazilian from Londrina, in the south of the country, had turned 32 on the eve of the meeting but celebrations were put on ice as her focus was solely on the Saucony International Grand Prix 3000m steeplechase at the Woodside Stadium on Saturday night.

Da Silva was already the Brazilian record holder with a time of 9:36.43 set last year but she smashed that with a superb solo run to set a new national and South American record of 9:24.38.

Little wonder that Da Silva was quite emotional as she talked about her success, with translation provided by her countrywoman Jacqueline Beatriz Weber, who had earlier run the 800m.

“I am so very happy to have broken the Brazilian and South American records,” said Da Silva.

“It seemed quite cold to me so I had to run fast!”

Da Silva and her compatriots are off to race in Madrid next before returning home to Brazil for their national championships.

“And then the World Championships in Oregon,” added Da Silva.

And with the interview over Da Silva, with the encouragement of BMC MC Peter Scott , gave a samba dance demonstration with her Brazilian crew – all filmed for family and friends back home – that wouldn’t have looked out of a place on an episode of Strictly then she was off for her warm-down.

What a way to celebrate your birthday. Feliz Aniversario as they say in Brazil.

If that was the highlight of the International Grand Prix meeting then Calli Thackery’s victory in the 5000m was the best British success story.

Runner-up Samantha Harrison (15:22.29) was also inside the Commonwealth Games standard. 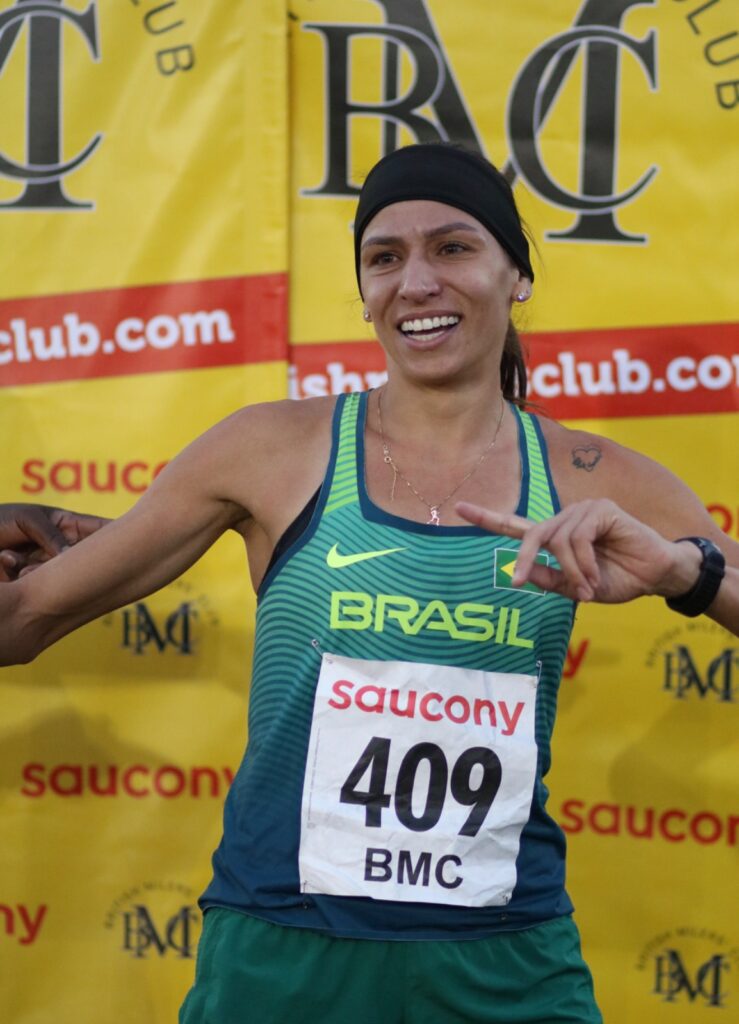 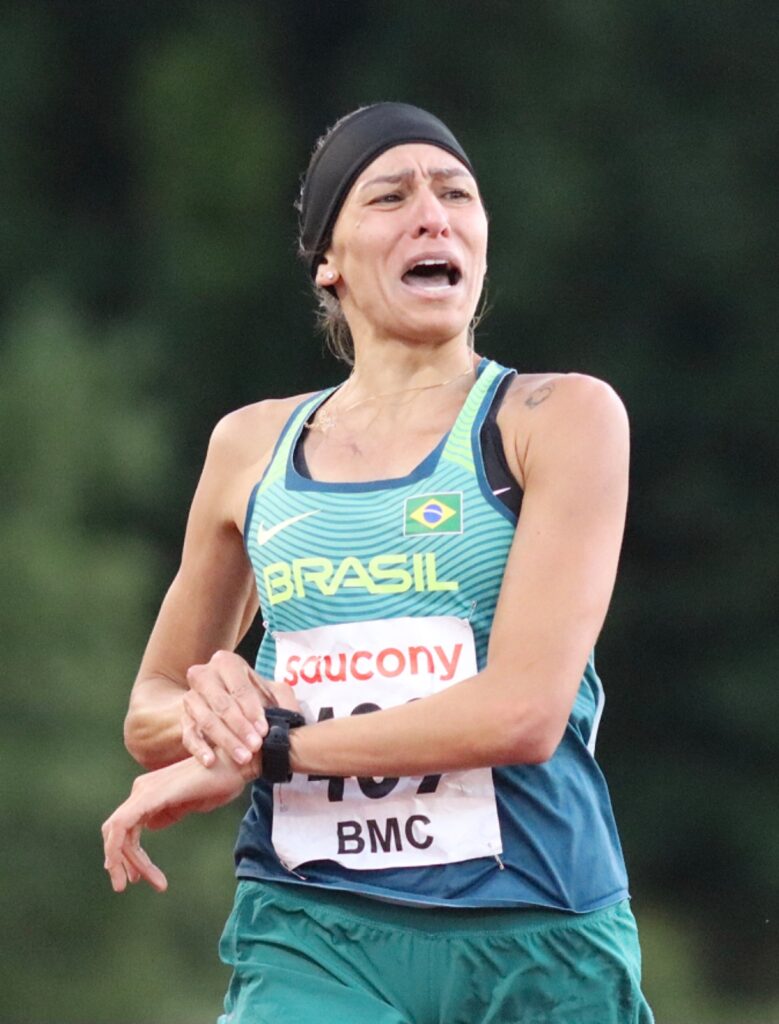 WITH the floodlights switched on Calli Thackery delivered a dazzling run to break her 5000m personal best for the third time this year and earn herself a £1,500 cheque from the BMC at the Saucony International Grand Prix at the Woodside Stadium.

Showing no hesitation in taking on the pace when it faltered the 29-year-old Rotherham athlete fully justified her late decision to run as she powered clear of the field to win in 15mins 06.26secs.

That shaved 2.82secs off the time she set in Australia on April 2nd, which in itself was a significant improvement on her earlier PB of 15:26.97 set in March, also Down Under where she has based herself with Nic Bideau’s group in Melbourne since 2019.

To underline the quality of that run it cemented her place at fourth in the UK Rankings – behind Jess Judd (14:57.19), Eilish McColgan (15:00.75) and Sarah Inglis (15:05.51) – and was her second time inside the World and European Championships qualifying standards.

“I am really pleased with that run tonight,” said Thackery.

“I really want to make a team for one of the major championships this year and to make the Worlds would be amazing.

“But we’ll have to see about that as we have amazing depth in the event and it will depend on what the likes of Jess, Eilish and Sarah decided to do.

“I now need to go to the British Championships and see if I can finish in the top two.”

Samantha Harrison, who has had some great runs on the road this year as well as finishing third in the British 10,000m Championships, helped with the early pace but admitted she was stretched to the limit.

“We agreed to work together at the start in order to help out Calli but she was just too quick for me!” said Harrison.

“But for me it is all about getting more experience of racing on the track and improving my speed.”

Eight of the top ten in that race all ran PBs with 14 of the 24 finishers doing likewise.

The men’s 5000m A race, the final event of an action-packed programme, also delivered with nine of the top ten clocking lifetime bests including the junior pair of Osian Perrin (13:49.26) and Jonny Livingstone (13:51.03) as they both dipped inside the World Junior Championships qualifying standard of 13:55.00.

Winner was Ian Crowe-Wright as he unleased a strong kick to hold off David Mullarkey crossing the line in 13:47.11 and break 13mins 50secs for the first time.

It was his first Grand Prix A race win and worth noting that a year ago he was finishing 10th at the Sportcity GP in 14:27.63 so Crowe-Wright is making great progress under coach Geoff Wightman.

“I was training in Flagstaff (America) with Geoff and Jake (Wightman) and that really helped me,” added Crowe-Wright.

In the B race, won by Ahmed Abdulle in 14:18.64, 13 of the 19 finishers recorded lifetime bests while in the C race half of the 18-strong fields did likewise. 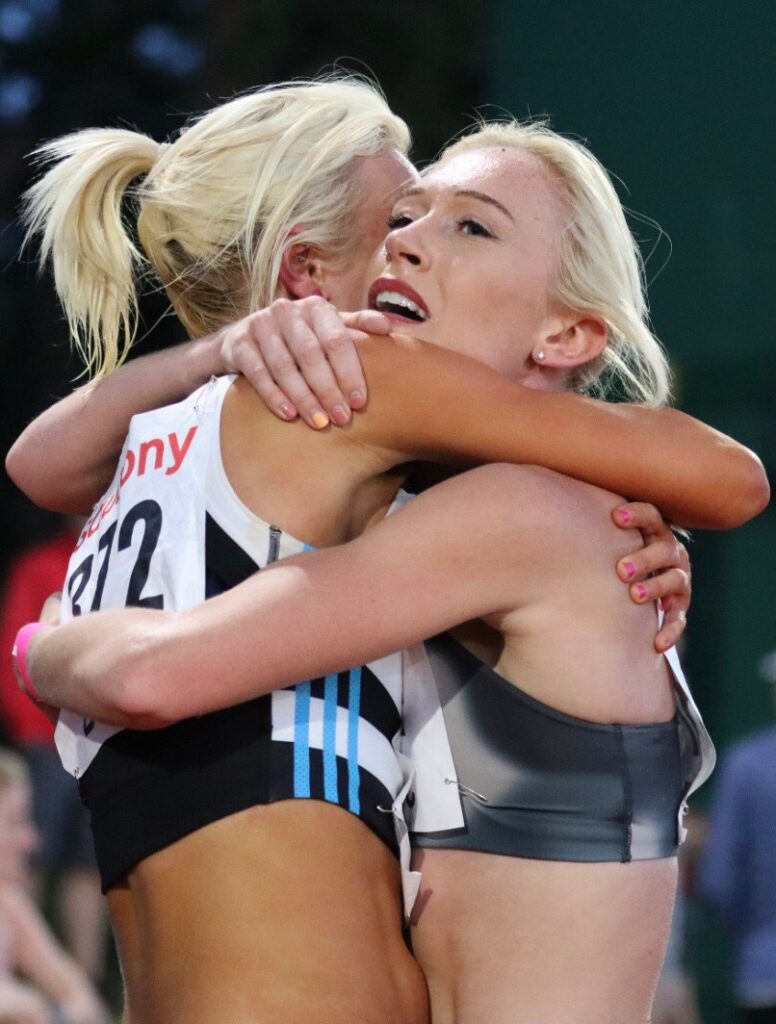 It was a glorious night for the Irish in the men’s and women’s A races as David English and Jenna Bromell claimed victories.

English timed his effort perfectly as he caught Kyle Langford, who had boldly forced the pace on from the bell, in the home straight.

“I figured tonight the conditions were not going to help really fast times so I was just pleased to catch Kyle and win,” said English.

“My plan this summer is to run the Worlds and the Europeans and I have the qualifying from last year already.”

Bromell also got her tactics right as the field opened up down the home straight and she nipped in down the inside for victory in 2:03.82, which was over a second outside her season’s best.

“On the first lap I didn’t feel that zippy so I knew I would have to grind it out and luckily the gaps opened up at the right time,” said Bromell.

“In the conditions I was pleased with the time and I know I have a faster time in me. I just need to get into the right race. But it was nice to get my first Grand Prix A victory. I’m pleased with that.”

Behind Bromell 15-year-old Phoebe Gill, who has already run 2:03.74 this year, ran another impressive 2:04.09 but is too young for the European Under 18 Championships.

Interestingly in that under 17 age group the top three performances in the UK Men’s Rankings for 2022 were set on Saturday evening.

“Mine was only a small PB but I’ll take it,” said Keen.

“Around the final bend I just told myself to wait, wait and wait as I have been caught out before by going too early. Now I want to see if I can get inside 1min 47secs this season.”

“I finished my last exam and everyone was heading down to the pub to celebrate but I said I had a race to run so went home!” said Ludewick.

While Ellie Baker strolled to a comfortable victory over 1500m at the Sportcity Grand Prix she was made to work a lot harder for her success at Watford.

With British 10,000m champion and Tokyo Olympian Jess Judd in the field it was never going to be any different; you have to earn the right to finish ahead of Judd in any race.

So it was  no surprise that when the pacemaker fell away Judd took up the strain and it was only coming off the final bend that Baker was able to ease ahead.

“I knew I had to stay with Jess and not let any gap open up,” said Baker.

“I was struggling on that last lap but managed to hang on and with my 800m speed I then knew I had enough to win. I’m so pleased to win and it was so nice to be in a race like that.

“I feel I’m getting faster with each race and it is progressing well towards the British Championships.”

Judd, who will race over 5000m in Oslo later this week, could also take out the positives from the event.

“I know I’m not very fast at that distance at the moment as I have been doing a lot of miles over the last few weeks so I was pleased with that last 100 metres,” she said.

Jenny Selman was also in the mix as the top three women broke clear and was happy with her PB of 4:08.24, just under a second outside the Scotland qualifying standard for the Commonwealth Games.

“It was good to get pulled around to a PB and I was very pleased with that time,” said Selman.

It was also good to see both Hannah Nuttall and Alexandra Millar clock PBs in fourth and fifth respectively.

“I was hoping for a sub 4mins 20secs so I’m delighted,” said Morley.

The first six all ran PBs in the B race and both Niamh Markham and Brogan Wallace clocked lifetime bests to win the C and E races respectively.

In his last race Piers Copeland suffered a broken elbow and failed to finish the Diamond League 1500m at Birmingham. This was his first outing since then so he was inevitably a little rusty but did enough to claim victory in 3:40.22 in one of the tightest finishes of the day with barely a second separating first from ninth.

“That wasn’t easy at all,” said Copeland.

“In fact I felt terrible. I have lost quite a bit of sharpness after breaking my elbow as I haven’t done any sessions and I had to have ten days off running.

“I’m just hoping that I can push on from here and that the win will kick-start my season.”

Copeland will race over 800m again in Marseilles on Wednesday and then go to the British Championships but whatever happens there at least he has been selected to represent Wales at the Commonwealth Games.

“The opportunity to compete in front of family and friends is brilliant so I’m delighted,” added Copeland.

In the battle to the line there were PBs for Ben MacMillan, Shane Bracken, Michael Wilson, international steeplechaser Phil Norman and Jack Rowe.

“I’m in good form and flying down from Fife was really worth it,” said 18-year-old Sandilands.

Another European Under 18s qualifying time was also set by Kettering’s Alice Bates in the women’s 1500m C race.

The 17-year-old, who is coached by Shane Smith, shaved 1.02secs off her personal best set at the Birmingham University Grand Prix meeting last month with a time of 4mins 25.66secs to finish sixth and crucially dip inside the Euro qualifying standard of 4mins 26.00secs for the first time.

The time puts Bates seventh in the UK U20 Rankings but there are two girls ahead of her eligible for the Euros who have so far run quicker; Jess Bailey (4:22.71) and Iris Downes (4:23.02), both set at Sportcity GP, though those girls are also ranked highly in the 3000m and 800m respectively. 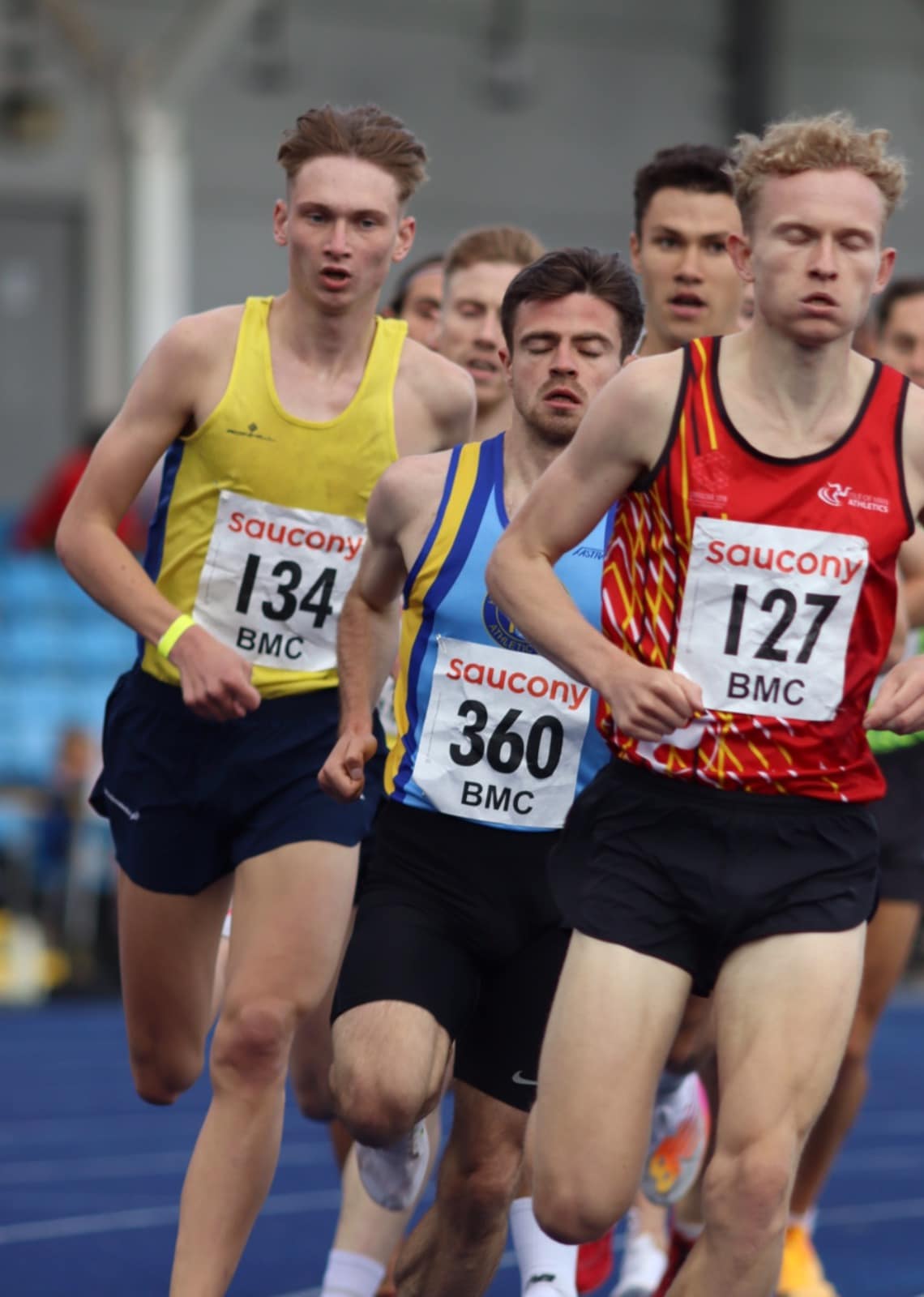 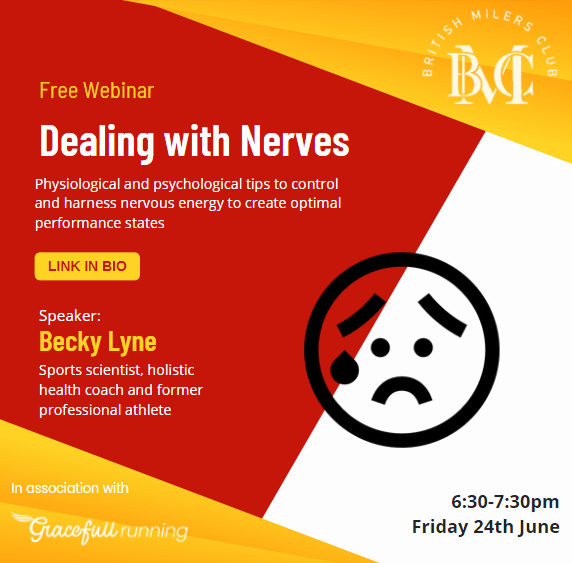 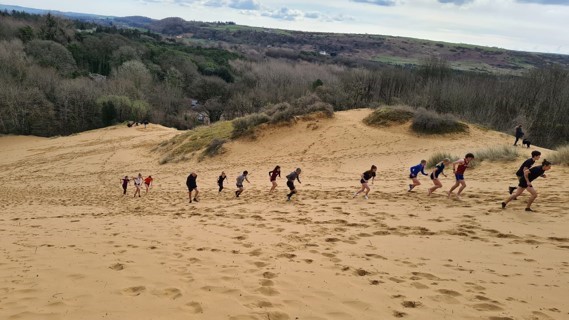