BEN Greenwood proved the old maximum that fortune favours the brave can indeed work on the track.

Going into the A race with a personal best of 3:48.07 dating back to 2018 the 22-year-old Perth Strathtay athlete decided it was time to be bold and take advantage of the pacemaker.

The result 3mins 41.76secs later was a massive personal best, his first victory in a Grand Prix A race and a cheque for £200 in the BMC’s Best of British prize scheme.

“We (under guidance from coach Carol Sharp) had been training to run at 58 seconds per lap so had a chat with the pacemaker on the start line and said I would go with that,” said Greenwood.

“I wasn’t sure anyone else was up for it but having requested the pacemaker to go off that fast Norman Poole (BMC President) said I owed it to him to stick with it.

“That was the game plan as I wanted to see what was there. I would have kicked myself if I had gone out conservatively and finished with a lot left.

“It was an unknown pace for me so the splits were unfamiliar and that was quite nice. I didn’t over-think it.”

Reaching 800m in around 1:55 Greenwood was 40 metres clear of the pack and out on his own and reaching the bell in 2:39.7 still had that advantage.

“When the pacemaker dropped out I had committed myself and knew I had to concentrate and work hard to maintain the pace,” added Greenwood.

“I felt I did that well until the last 150 metres; it was a very long, long home straight! But I had to hang on and I was really happy to win.

“People said afterwards it was windy but I didn’t feel it as I am used to training in gale force winds in Scotland!”

Greenwood returns to BMC action in the 800m in the Gold Standard meeting at Trafford on Tuesday followed by another 1500m at the BMC Glasgow Regional meeting on Friday when he will be chasing another prize.

“I am trying to get the Scottish qualifying standard of 3:40.77 for the Commonwealth Games next year and after Loughborough that feels do-able,” said Greenwood.

In the other race behind Greenwood Ireland’s Darragh McElhinney finished fastest to grab second with a PB of 3:42.14 and there were four further PBs, including for European Under Championship 800m finalist Ben Pattison.

The women’s A race also witnessed a big PB but an entirely different race. Ellie Baker and Georgie Hartigan were the stand-out performers in the field and were soon to the front but not really going with pacemaker Gemma Kersey, who had earlier won the 2000m steeplechase in a PB.

It remained a cagey affair with neither woman wanting to show their hand too early but at the bell Baker hit the front with Hartigan and Sabrina Sinha on her heels.

Baker, who has been racing so well over 800m this season and came so close to making the team for the Olympics, steadily raised the tempo on the final circuit and finished strongly in 4:11.34 to slice just over two seconds off her previous best.

Furthermore, it was Baker’s second Grand Prix victory this summer after her 800m success at Watford which means she has leapt to the top of the BMC Points Grand Prix and heading into the final meeting at Eltham next month in a strong position to secure the £1,000 top prize.

“I was really happy with my PB,” said Baker.

“I thought Georgie might go with the pacemaker but in the conditions, which were quite windy, she was apprehensive about going out too hard.

“But it was something fun and different to do and helped me ease my way into the distance. I’ll do a few more this season and see if I can get a quicker time.”

The 23-year-old Brighton-based international finished strongly enough to suggest there is another chunk to come off that time this season to push her into the top ten of the UK Rankings along with her current sixth place over 800m.

Behind Baker Hartigan held onto second while Sinha was also rewarded with a PB of 4:14.20 in third and there were another three lifetime bests in the top ten.

In the other races Emily Moyes proved she has a liking for the Loughborough track as she unleashed a terrific last lap to win the C event in a PB of 4:25.58.

Moyes’ previous best of 4:26.49 was set on the same track four years ago when she finished fifth in the B race so it has been a long wait to better that time although she has been busy in other areas, particularly the steeplechase.

Among the men’s five supporting races three of the winner’s claimed PBs; Jonathan Whan in the C race, junior Kian Wiles in the D and Daniel Bradford in the F.

Like Greenwood in the men’s 1500m Tom Randolph enjoyed his debut win in a Grand Prix A event in the 800m to earn him a cheque for £250.

Three years ago Randolph won the D race at the same meeting in 1:51.98 but he has travelled a long way since then, in particular this summer with a bronze medal in the 800m at the European Under 23 Championships clocking a lifetime best of 1:46.41.

He also finished third at the Sportcity GP meeting earlier this summer so his win at Loughborough, racing aggressively after the pacemaker dropped out at 550m, is his best BMC result to date.

“It is actually my first win of the season!” said Randolph.

“I have been in the top three of all my other races but it is nice to get that win and some prize money. This year is the first time I have ever won anything with the two BMC Grand Prix results so that helps.

“The bronze at the Europeans has obviously been the highlight of the year and it is something for me to build upon in the next few seasons.”

Randolph has improved his outdoor PB by around five seconds this summer with just over three seconds carved from his indoor best last year so the Tamworth runner is an athlete moving quickly in the right direction.

Tiarnan Crorken, who represented Britain in the 1500m at the European U23s, emerged from the chasing pack to secure second place.

Younger sister Abigail Ives caught the eye with her winning performance in the C race as she not only smashed her PB but dipped inside 2:10 for the first time with 2:04.12.

That lifted the 17-year-old Basildon athlete to second in the UK Rankings on top of her first place in the 1500m.

“I had only done one other 800m this season (2:10.69 to win the BMC Regional meeting at Gillingham, in May) so I was hoping to take a couple of seconds off my PB but never dreamt it would be six!” said Ives.

“That would have been the qualifying standard for the European Under 20s which is slightly annoying but I had gone for the 1500m and was just outside the standard for that.

Elsewhere in the 800m there were wins and lifetime bests for James McMurray, Thomas Keen, Adam Peacock and Eddie Hunter in the B, C, E and H races respectively, with Keen going under 1:50 for the first time.

There was also a PB for teenager Holly Watson in the D race as she ran 2:10.71 to move her into the UK top ten at under 17 level.

Pre-race favourites Jenny Nesbitt (15:34.86) and Hugo Milner (13:44.46) duly delivered in their respective 5000m races with Derby athlete Milner going under 13:50 for the first time to add victory to his success at Sportcity. Nesbitt’s time was a season’s best.

An additional race was added to the programme this year with the George Gandy Memorial Mile, boasting a quality field of past or present students who benefitted enormously from his coaching and advice.

To great acclaim from the watching spectators, including several ex-internationals who worked with him, Preston’s British 5000m champion Patrick Dever celebrated the occasion by dipping inside four minutes with victory in 3:58.62. Gandy would have been delighted.

The athletics meeting followed on from the George Gandy Memorial Service with many attendees of the service watching on.

During the meeting several of George’s former athletes such as Laura Whittle and Jack Buckner were interviewed. It was also announced that the memorial fund in George’s name would partner with the BMC. 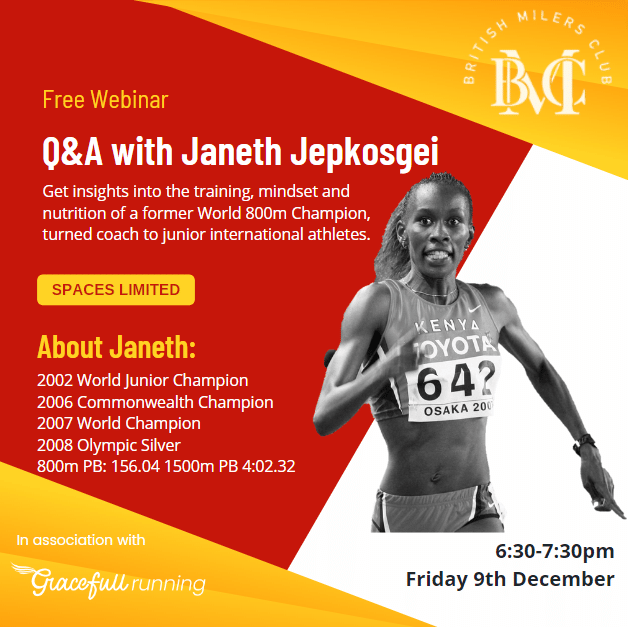 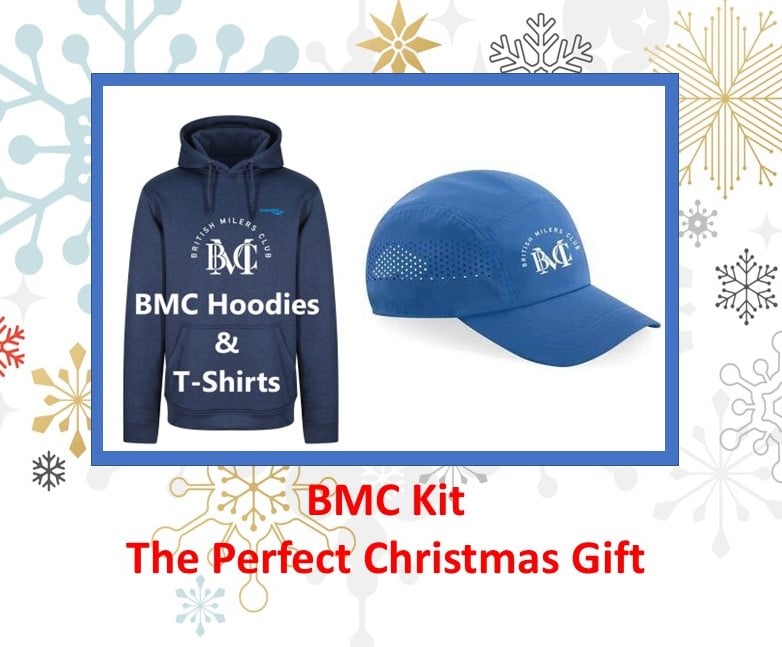 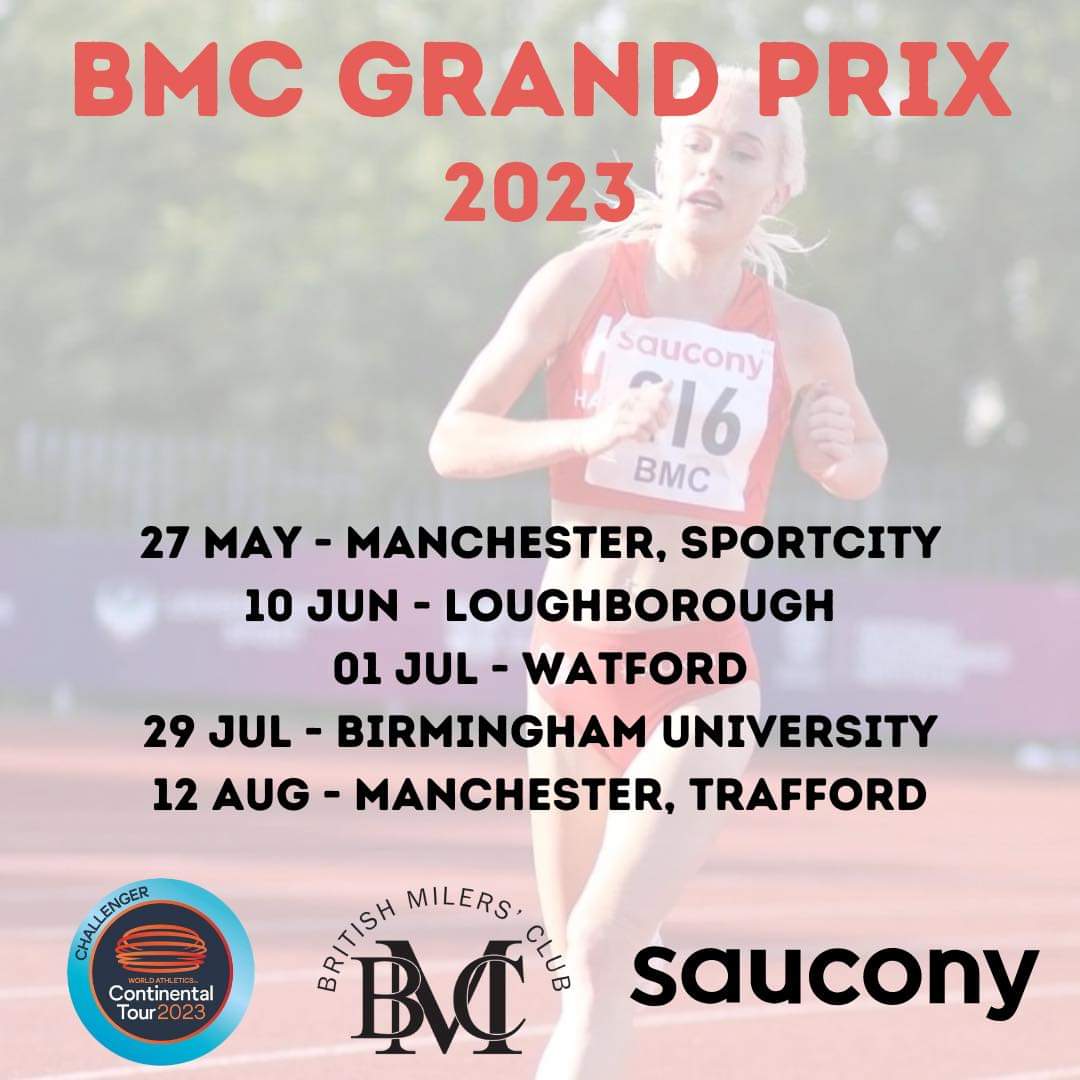